Jatensa, the purest being in all existence gazed upon the emptiness. There was no void, nor was there light. Pure emptiness surrounded him, but he was not afraid.

With his bright golden hands, he chanted, “May a hammer, created from pure light and power, come to be.” And so, a divine hammer formed into his hand and he held it with dignity, admiring its beauty.

Then, he chanted again, “May an anvil, formed from stone and light, form before me.” And so, a glorious anvil appeared in front of him and he nodded, pleased by the results.

He then formed an orb of pure light into his hand and placed it onto the anvil. He then raised the hammer and struct the light with all his force, forging the first star. After he got the shape of the star, he sang a spell and gave it a breath of life, making it burn bright and warm.

He then allowed it to depart from him and venture into the nothingness, slowly creating light all around it. Jatensa saw great beauty in his creation and created more stars for aeons.

When he finally stopped and allowed the anvil to cool down, he saw all the emptiness filled with his creations. Stars shined and warmed the world around him, and he saw this as beautiful and perfect.

He then went back to his anvil and forged a new creation. He created a tower, higher than any other in existence and placed it in a place he saw fit. He then chanted a spell, which made all the stars rotate around the tower, making it the centre of all.

On top of the tower, he placed the first star he had created, crowning it with purity and divine beauty, and this he saw as perfect and allowed it to be.

He then wandered the world he had created, walking among the stars, but he felt something was missing. He could see stars and light, but there was no one to see them. He then went back to his anvil and began forging.

He forged another being, tall and strong, and gave him many gifts of power. He created another of his kind, one who could walk among the stars and forge things into being with light.

But when he was finished, he saw only an empty body, standing before him, cold and dead. This creation was not like the stars or the tower, he wanted to create a being, capable of free will and thought. And so, he took a piece of himself and from it, he forged a soul.

He then placed the soul into the being’s heart, and immediately after, the being opened his eyes.

His heart beat and hair began growing from his head. He was able to look around him and study himself. He was curious but confused, but Jatensa comforted him and told him his purpose.

He named the being Alrensu and taught him the ways of forging life. He told him that if he wanted to create a living being, he would have to take a part of himself and forge it into the being, for only then could free will be achieved.

For aeons, they crafted worlds and peoples, filling the existence with beauty and life, until one day, Alrensu left the tower to explore the existence.

He wandered for years, wondering if the existence would ever end. So long did he wander that he found a point from which the light from the tower could not reach, thus, in front of him stood emptiness.

He walked forth and fell into the empty void, and so long did he fall that when he returned, he was not himself.

Alrensu became greedy. He wanted to create beings but refused to sacrifice a part of himself in the process.

Jatensa created more beings like himself, which enraged Alrensu who farther fell into his madness, until one day, he touched the surface of a world and poisoned it with his malice.

The world collapsed and was destroyed, only to be replaced by a hollow ring, which drained the light from all around it.

So long was Alrensu able to continue on his path to the madness that when Jatensa finally found him, it was too late. Alrensu had chosen the path of darkness.

They fought and Jatensa easily defeated his own creation, but he couldn’t bring himself to destroy him. He was his creation, his first living creation and he would never hurt him.

Thus, he forced him to leave the Tower of Existence behind and wander back into the void, where he slowly crafted his own vision of existence.

Jatensa crafted many more beings he later named Anlaotar, some of whom he sent to the border of existence to keep Alrensu away from the living, for if he would reach the light, he would poison it and bring it down with him.

You can also support me by purchasing a copy of my book, The Battle of the Broken Mind!

Thanks for all the new follows! See you in the next post! Cheers, my fellow writers and other creative wizards! 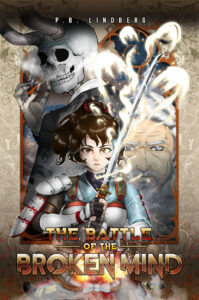